As is typical of his style, Levy, the all-knowing technocrat, boasts his thesis with an aura of smug confidence. Skyscrapers and trains are imperative, he insists, because of the economic value unlocked by greater density; the moral imperative to avert catastrophic climate change; and the cold, impersonal hand of urban economics, which points the way toward a concentrated and agglomerated future. I, like Levy, see the virtues of dense urban development and mass transit; I believe that in many ways, the world would be better off under his “regime of green prosperity.” But good government is about minding the individual needs of millions of citizens, not molding them into cartoon caricatures so you can run them over with the bulldozer. You would never know that from Levy’s reading of the historical record, which is reason to give anyone pause.

In “The Future is not Retro,” he compresses all urban history into an interplay between two population pools—those who live in central cities, and those who do not—whose division of the population, like a seesaw, has teetered back and forth as economic fads come and go. Progress is the recurring theme here. At any given moment, there are those on the right side of history (whom Levy does not name, but we might call them urban progressives) and those on the wrong side of history, the “traditionalists” with their ignorant, selfish, “retro attitudes” Levy reserves so much of his contempt for. It should be obvious, I hope, that this is an absurdly reductive lens through which to view an entire metropolitan area and all of its facets, such as industry, commerce, social networks, transportation networks, political relationships, and power dynamics, to name just a few.

So, for example, the exclusion of the inner-city poor from the prosperity of the suburbs due to restrictive zoning—and racial covenants, and redlining, and block-busting, and other forms of racially motivated housing discrimination—Levy codes as “early 20th century urbanites [adapting] to the reality of suburbanization a generation later.” It’s his choice to expunge all social and political struggle from the historical record, but that does not prove that it didn’t happen or that it doesn’t matter. Picture a Bronx resident in the 1950s, unable to obtain a mortgage for a suburban home because the bank doesn’t take kindly to the color of his skin, and a Beverly Hills millionaire in 2019, lobbying against an affordable housing development because of the shadow it will cast over his lawn. If there is a clear and pertinent difference between these two retrograde “traditionalists,” it eludes Levy.

So it’s little surprise Levy views 21st-century urbanization as yet another conflict in the same old story of the Progressives versus the Luddites. In his mind, it’s black and white: Dense urban development is culturally diverse and the way of the future, while the suburbs are outmoded, exclusive, and racist—full of “Basil Fawlty types who either can’t or won’t adapt to a world that has little use for their prejudices,” with “no racial minorities or working-class people within sight,” as he puts it. If Levy sincerely believes this is an accurate representation of our urban geography, I suggest he go for a walk in a 21st-century suburb—because in 2019, you can have your cake and eat it, too: a detached house with a yard, and racial minorities and working-class people!

It’s true, according to Brookings: “Minorities represent 35 percent of suburban residents, similar to their share of overall U.S. population.” In 1980, the sleepy exurb of Anaheim, California was just 17 percent Hispanic; by 2015, that percentage had skyrocketed to 53 percent. In 1970, 25 percent of all African Americans in metro Washington, D.C lived in the suburbs; by 2000, 78 percent of them did. Have the new wave of minority suburbanites been priced out of hopping central cities (by insufficient housing supply, no doubt), but would otherwise prefer greener, hipper apartment living? Some of them, surely, but many are proud of the communities they’ve made their own. In the suburbs of Atlanta, they voted down a rapid transit expansion because they loathed a tax increase and did not want to import “city problems.” Some of them (gasp!) even vote Republican.

This is not to say contemporary suburban life is without its own set of problems. Local municipalities, now grown-up governments with formal responsibilities instead of shadowy fiefdoms for the well-to-do, must stretch their already-thin resources to cover social services—as opposed to, say, kickback deals for Disneyland. Crime, poverty, and opioids, once considered stereotypical inner-city problems, are spreading into the aging suburbs. Delivering healthcare, education, transit, Internet, and other services over the “last mile” to low-density households is a snowballing challenge that keeps policymakers up at night. Here’s a thought: What if instead of pretending disadvantaged suburbanites don’t exist, or denigrating their choice of housing stock, we apply our big smart urban planning brains to solving the problems they’re dealing with right now?

But of course, we’re planners; we’re engineers—or at least wannabe planners and engineers. We’re left-brain technocrats who believe cities are machines that can be tuned to peak efficiency; that all of governing can be boiled down to data, European best practices, and sweeping generalizations of economic history. We spend so much time arguing about such inane microcosms of urban policy as setbacks, timed transfers, floor-area ratios, cant deficiencies, zoned capacities, and parking maximums—doing battle on Twitter, and on the Pedestrian Observations and CityLab comment sections—that we’ve paid astonishingly little attention to the people who actually inhabit those cities. We ignore them at our peril. For what is a city if not a political construct, whose goals and priorities are decided by those who happen to be in charge? It is the leaders they elect who will put the “rubber” of theory to the “road” of practice, building the transportation systems, writing the legislature, and approving the development projects that will shape our urbanizing future. 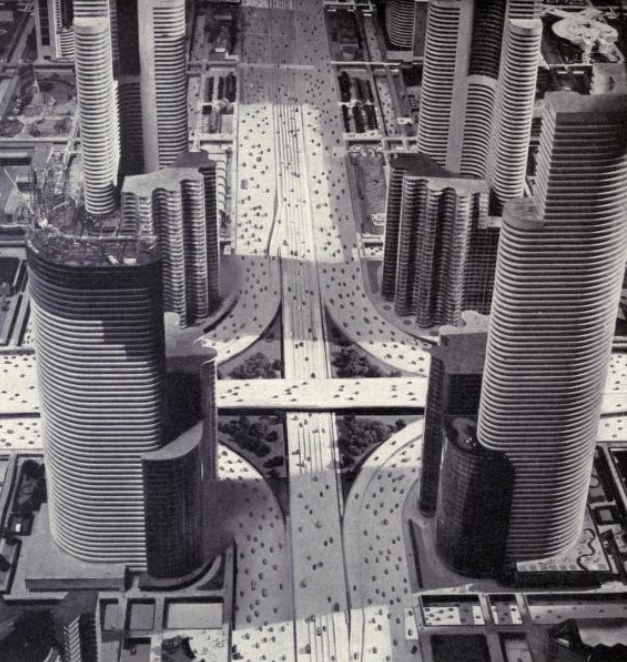 Every age is framed by its futurists, and I give Levy credit where credit is due for committing to paper a metropolitan vision fit for the 21st century. Nevertheless, I couldn’t help but notice the similarities between his “spiky” template for transit-oriented development and GM’s Futurama diorama, from the 1939 World’s Fair—just swap the maze of elevated highways for rapid transit and high-speed rail tracks. And perhaps the most striking thing about the Futurama diorama is that we are now grateful its vision for the “city of tomorrow” never came to pass.