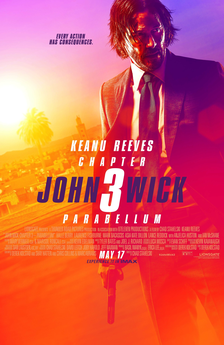 The film makes some fine first impressions. It starts with Wick on the run, a bounty placed on his head by the High Table, getting stalked through the seedy streets of lower Manhattan by swarms of assailants disguised in the crowds. He’s outnumbered, outgunned, and can’t trust anybody–see that raggedly dressed hobo smoking a joint behind the dumpster? Blink twice, and now he’s aiming a handgun. But all of the High Table goons in the world are no match for Wick, who dispatches them with lethal efficiency, his spur-of-the-moment weapons ranging from pistols and throwing knives to horses and library books.

Needless to say, this deadly ballet (the film’s metaphor, not mine; it introduces ballerina assassins) delivers all of the supremely inventive thrills action junkies could hope for, and the movie’s forward momentum is lock-step with Wick’s breakneck pace as he races through Manhattan’s neon-lit streets and alleyways. There’s even a scene in which Wick stabs his opponent through their eyeball–and, yes, it happens on camera. (My theater cheered.) The movie thoughtfully reveals a softer side of Wick, too–one that is paranoid, vulnerable, desperate–when he begs an old doctor friend of his, barred by the High Table from helping Wick under any circumstances, for a patch-up job for a knife fight even Wick couldn’t win unscathed.

I assume that conflict between friendship and duty is supposed to be a recurring theme, even if it’s difficult to tell from the way the rest of the story unfolds. You see, the Adjudicator (Asia Kate Dillon), a very emotionless, bureaucratic, private investigator of sorts, has been assigned by the High Table to punish Wick’s associates–which involves interrogations, demotions, and swords, in that order–for aiding and abetting the last-movie murder spree that soured Wick’s relationship with the High Table in the first place. But the one who gets most screen time, by far, is Sofia (Halle Berry), who tag-teams with Wick for a Saharan shootout that’s many minutes too long–not one of which explores the anticipated consequences of her actions, be they a visit from the Adjudicator or otherwise. How not very satisfying. Not to mention the moment when (mild spoiler) someone fires a bullet into Sofia’s favorite attack dog, which survives–of course–thanks to body armor, the hallmark of a crowd-pleasing movie that’s playing things too safe.

The remainder of this transparently it’s-for-the-fans film has little to offer besides guns. Lots of guns. Only a few stylistic embellishments offer any relief from the increasingly mind-numbing, over-the-top martial arts and automatic-fire action, featuring Wick pumping shotgun shell after shotgun shell into waves of anonymous body armor-clad soldiers. (Nobody in my theater was cheering now.) One hopes the film’s characters might infuse all of the mayhem with a sense of purpose, but the script simply doesn’t give them enough time to do so. I give Wick credit for suffering a major betrayal toward the end of the film, but it takes two compelling characters to tango, so that moment is robbed of its punch to the gut. And, let’s be honest: Any less-punch-more-talk scenes serve mostly to demonstrate that for all of Keanu Reeves’ acting talents, delivering sappy dialog isn’t one of them.

You still root for Wick as he shoots, stabs, and parries his way through waves of bigger and bigger baddies, even as it dawns on you that each encounter is molded in a fairly predictable pattern: Somebody identifies Wick, so they fight. Wick wins. Yet another nameless adversary drops dead. But taking on the task of saving his whole film–which is in need of a healthy dose of tension or stakes, or at least fun–proves too big a job even for this master assassin.